The flat black radiator fins provide a tasteful contrast to the brightly chromed shell, lights and light bar on this Kissel.

Preparedness is to be found in the details.  This Kissel anticipates dealing with stepping up and in over a puddle, changing a flat tire,  seeing a danger materialize from behind, or even playing a few holes at the links. 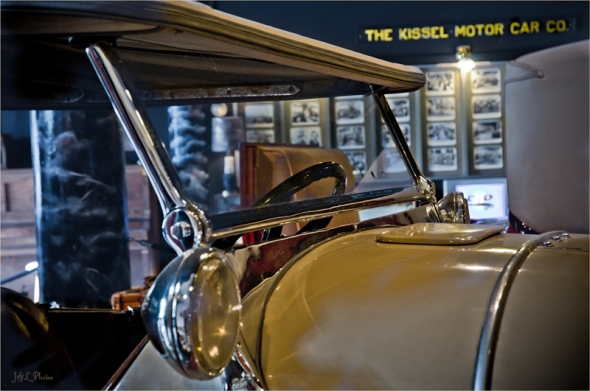 The Kissel Motor Car Co. built cars, trucks and utility vehicles in their plant located in Hartford, WI, from 1906 to 1930.  The company prospered while producing WWI military vehicles but could not compete for sales during the depression.  This is a 1930 Kissel Model 8-95 White Eagle Touring car.

Cars made in WI are featured in the Wisconsin Automotive Museum, with emphasis on Kissel and Nash vehicles;  however,  other cars are also included as seen by the green torpedo shaped Tucker.

An image of this type of archaic camera is frequently used as an icon for cameras, photos or photography in general.  This particular camera was used in the ‘20s and ‘30s to photograph many of Wisconsin manufactured autos on display at the Wisconsin Automotive Museum in Hartford, WI when they were new.