Willow Weep For Me 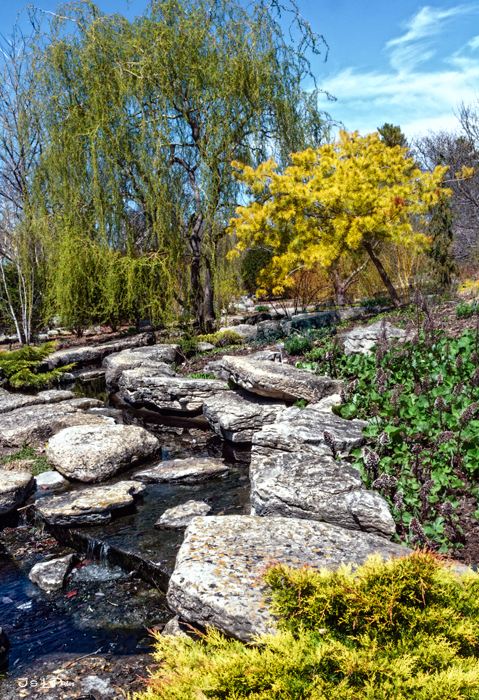 A Sight to Behold

This mammoth Cottonwood tree at Olbrich Botanical Gardens was a sight to behold.

House of the Rising Sun

The golden roof of the Thai Pavilion located at Olbrich Botanical Gardens sparkles in the sunshine.

A book stack in Memorial Library.

Part of a mosaic that decorates the foyer of U W Madison’s Memorial Library.

Glass etchings are suspended over a staircase in the Red Gym.

Constructed of red brick, the Red Gym was designed in the Romanesque revival style and built in 1894 to function as a combination gymnasium and armory.  After surviving demolition plans after WWII and again in 1963, as well as an anti-war protest firebomb in 1970, it was declared a National Historic Landmark in 1993 and presently serves as the University Visitors Center.

Terrazzo floors in Memorial Union are polished to . . . reflection. 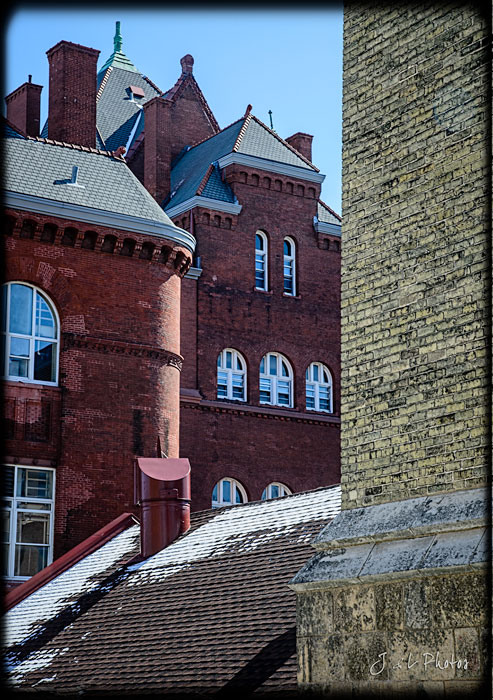 Four roof sections, but we can’t remember which buildings . . . somewhere near the science building and Memorial Union. 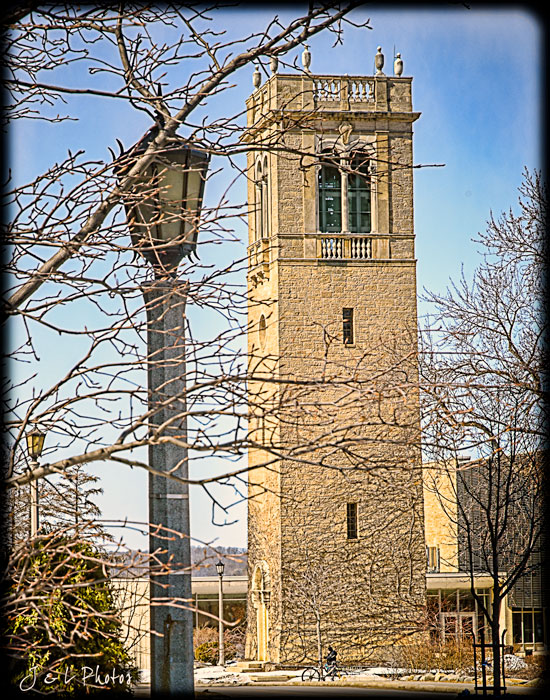 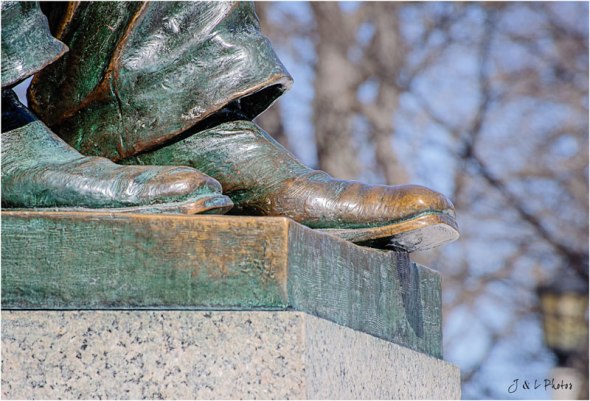 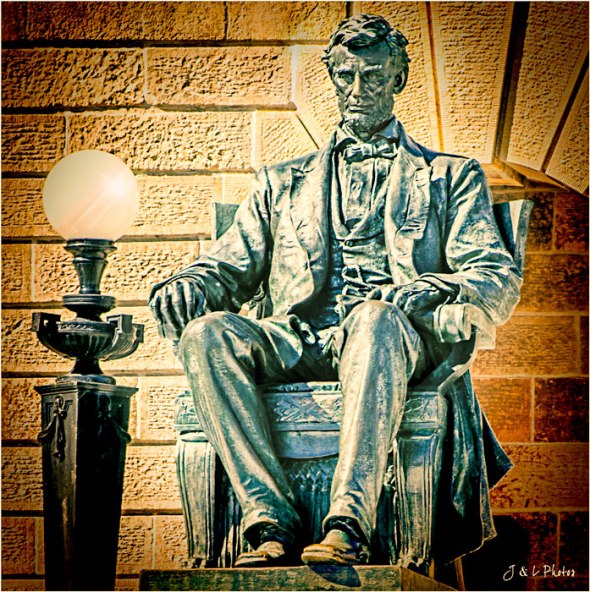 This statue of Abe Lincoln arrived on the campus of the University of Wisconsin Madison in 1909.  In 1919 it was moved to its present location in front of Bascom Hall where it has become part of University history. Graduates crawl onto Abe’s lap to whisper their hopes and dreams into his ear and kiss his cheek; however, overanxious students who jump into Abe’s lap before commencement week have been known not to graduate.

State Street vendors offer UW Madison students a variety of fast food and beverage choices.  This one specializes in tea.

A silhouette of John observing Lake Monona before we leave adds a bit of peacefulness to the scene.

The juxtaposition of curved and straight lines and warm monochromatic colors interspersed with green plants and red stairs create a relaxed yet vibrant ambience within the Monona Terrace.

A quarter second shutter speed was used in an attempt to blur the moving escalator.  Unintentional camera movement exacerbated by an awkward shooting position near the floor also blurred the ceiling lines, giving them  soft edges which may seem to compliment their gentle curves, light color and soft lighting. 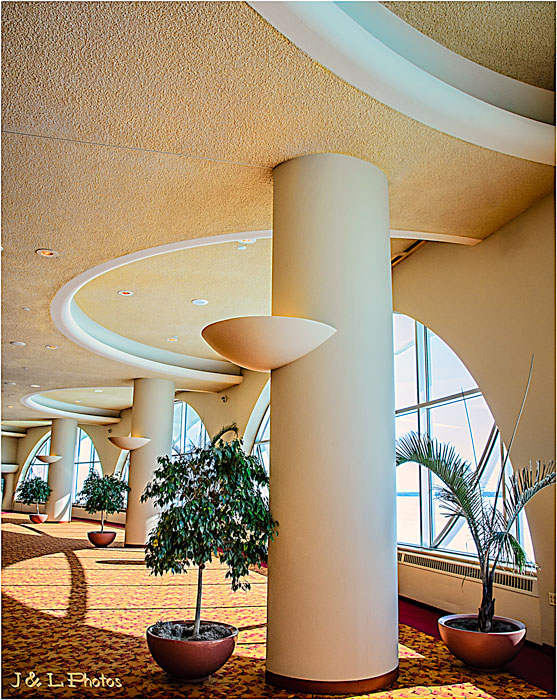 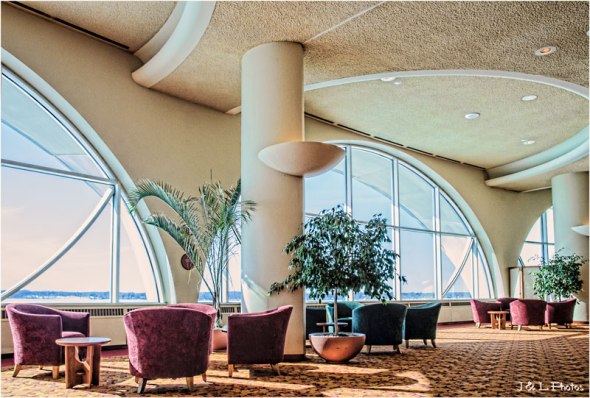 Curves, spheres, semicircles, straight lines and arcs abound inside Monona Terrace, which was finally completed in 1997, more than fifty years after Frank Lloyd Wright’s death.  Wright made a number of alterations to his original design during his lifetime and the exterior design is his, but the interior was designed by Anthony Puttnam, a former Wright apprentice.

Washington Ave. in Madison, WI, on our way to Frank Lloyd Wright’s Monona Terrace which is located two blocks southeast of the state capitol.  Madison did not have the high snow banks and piles we left in Appleton, even after a bit of rain.

Rubbing the nose of the badger that dwells outside our governor’s office in the Capital is said to bring good luck.  That poor badger’s nose has been almost rubbed off this year in the wake of  Wisconsinites’ passion to recapture political integrity there.  That passion is also being expressed as petitions for the governor’s recall numbered over 300,000 in the first twelve days of canvasing, and numbered 500,000 at last count.  540,208 signatures are required to force the recall election.  700,000 signatures is the ultimate goal.

The image of our State Capital can be reflected by surfaces other than  those offered by the bank across the street. New “tools” (to use the Governor’s term) manufactured by executives and their funds are not always needed to initiate  complete “makeovers” as shown on TV.

Through tenacity and diligence Wisconsin’s competent workers have already accumulated the “tools” necessary for required maintenance of our building:  A two party political system, established rights, free access to information, a free and unlimited public dialogue in which the ideas of others are actually considered, an ability to compromise, and a fair ballot box. And, in the far corner of the toolbox:  A recall procedure.

Like the building itself, the old “tools” are priceless.  Now their protection also requires a tenacious, diligent and involved electorate.