After the tour Lois enjoys sampling the brews.

Kegs of beer are too heavy to load pallets from the line by hand so a highly maneuverable lifting  apparatus is employed. 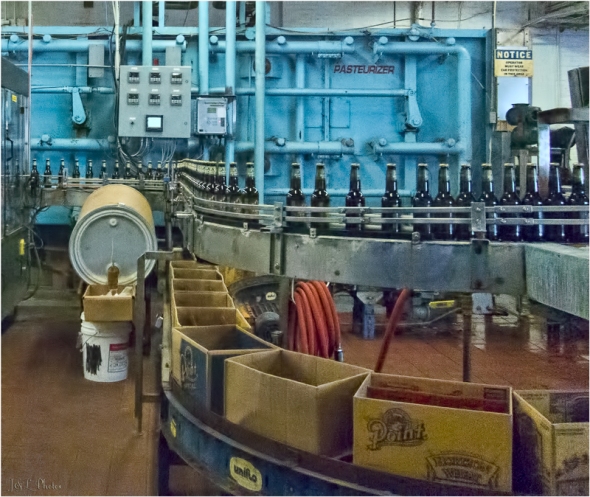 After proper aging and filtration the finished beer is piped to the appropriate packaging areas where it is bottled, caned or put in kegs.

As we understand the process, converted mash is piped to a lauter tun and then returned to the mash brew kettle. Boiled wort is piped to a cooler, yeast bin, fermenters and aging tanks.  The complex what-goes-where process was illustrated on a posted diagram and described by our guide in a very noisy environment, and this is the best explanation we can give.  (We could find wort and tun in the dictionary, but not lauter.)

Barley malts and cooked corn grits are allocated by weighed amounts to a large mash tun brew kettle in the Point Brewery.  This appears to be old technology adapted to a newer process.

The character Nicolas C. Point stands beside the Point Brewery gift shop in Stevens Point, WI.  Nicolas is based on an actual brewery employee from the 19th century . . . although we were told his head did not always look like this. The Point Brewery is American’s fourth oldest brewery in continuous operation.