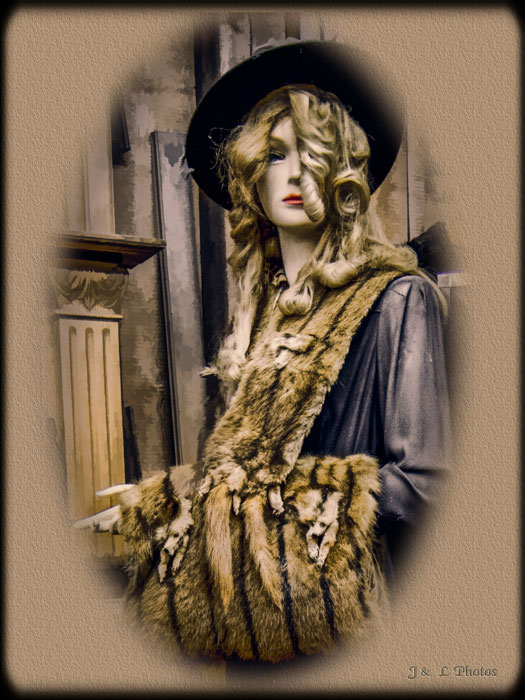 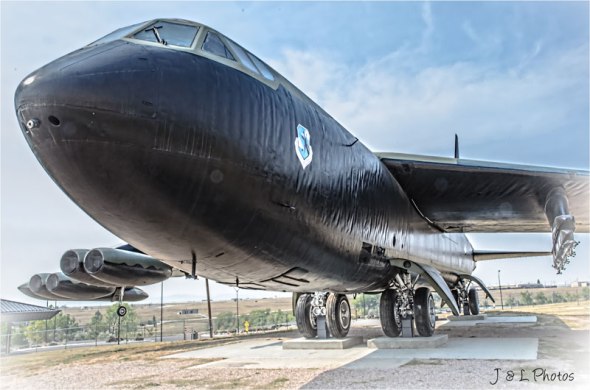 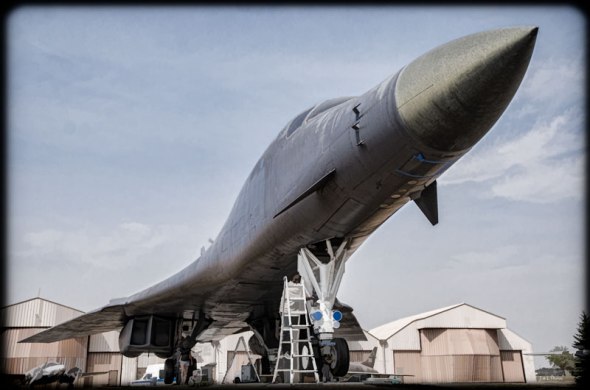 This fighter sure looked futuristic to us.  Whatever it is, it’s getting some cosmetic care for display.  (It looked like the F18 we saw at the EAA air show.) 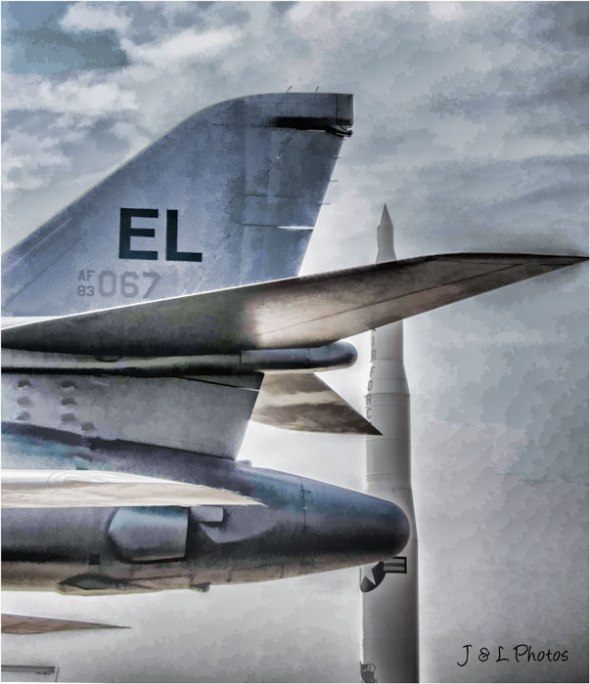 The aircraft displays were reminiscent of the gloomy Cold War days between the US and the Soviet Union during the last half of the 20th century.  Here a Minuteman missile lurks ominously behind the tail of a military aircraft. 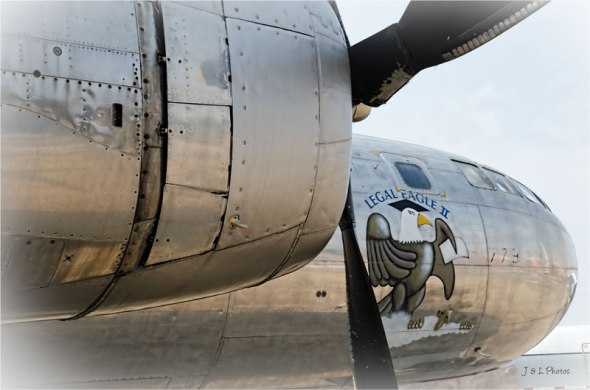 “Kilroy was here” . . . Kilroy, the famous super GI who participated in every combat, training  and occupation during WWII and the Korean War, can be seen peeking over the cloud upon which the eagle is standing.  The KB-29M Legal Eagle II is on display at the Ellsworth South Dakota Air and Space Museum. 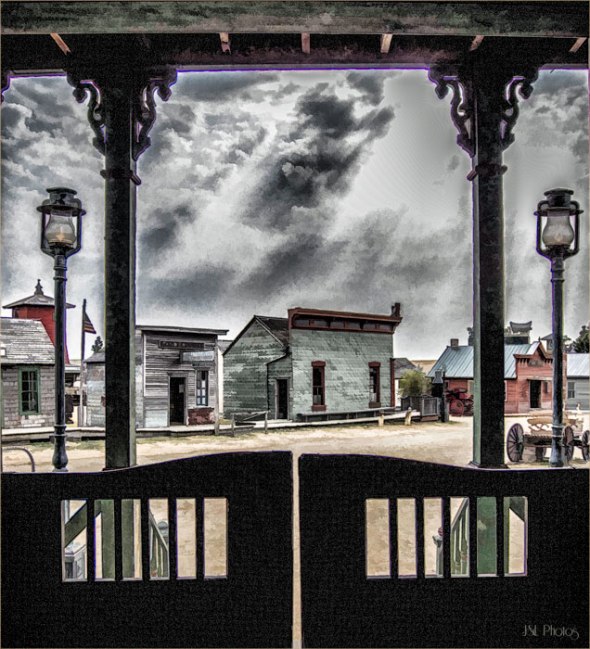 We photographed the street from the bartender’s point of view.  Denizens were few and far between . . . looked like rain. 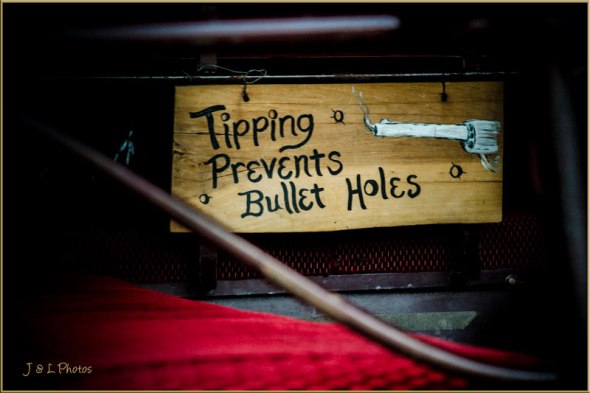 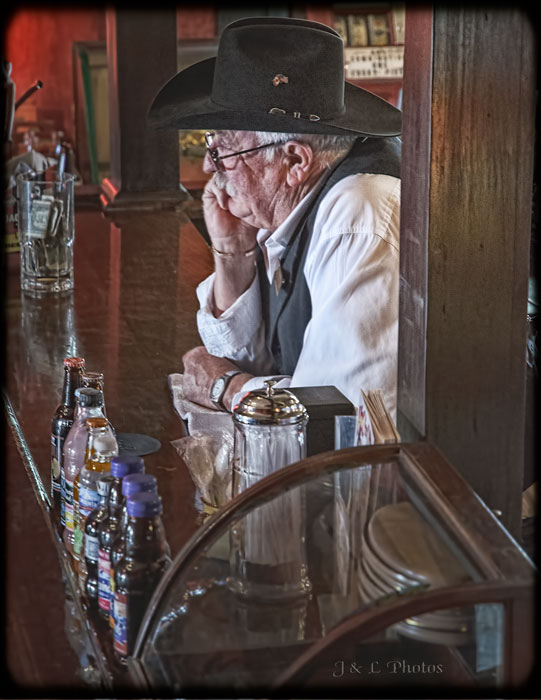 Object of his desire:  Patrons! This is a ghost town! 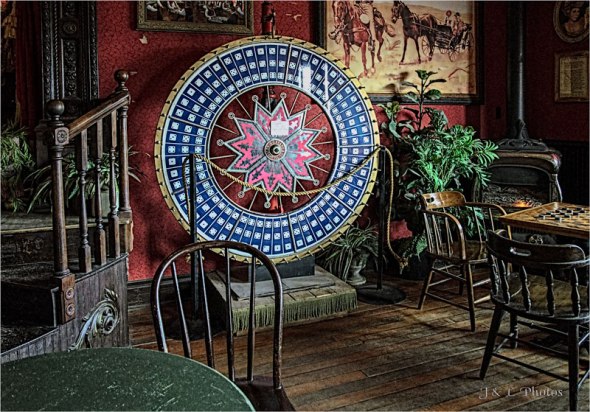 The Longhorn Saloon offered the pastimes of gambling and checkers in addition to the bartender’s whistle whetters. 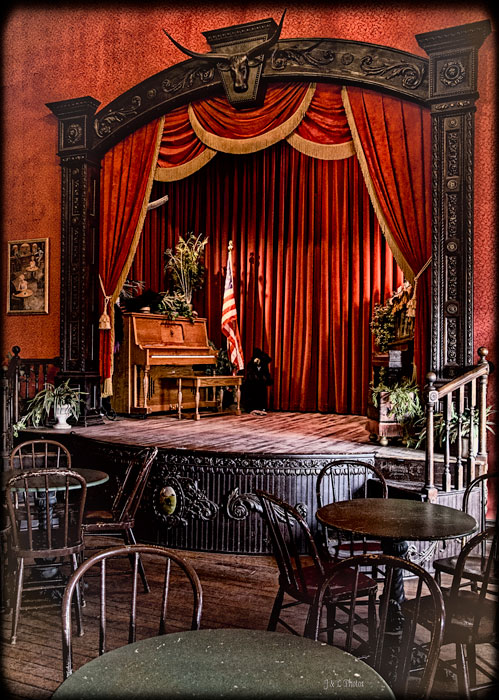 We thought the Longhorn Saloon quite fancy for the times and the place.  Bring on the piano player and the dancing girls. 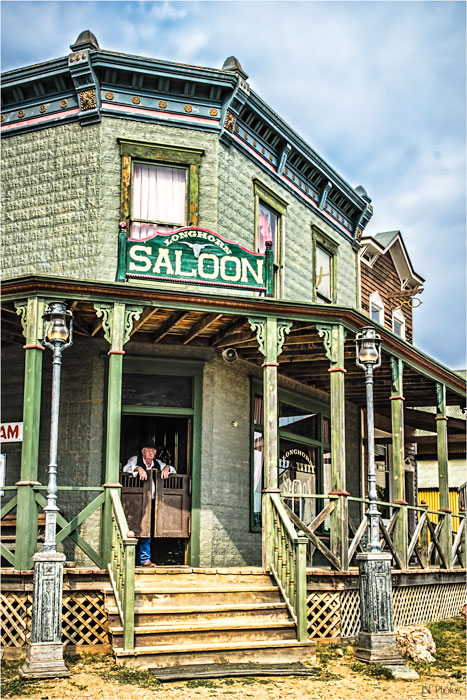 City life once flourished at the Longhorn Saloon, which was complete with bartender and open for business when we toured the town. 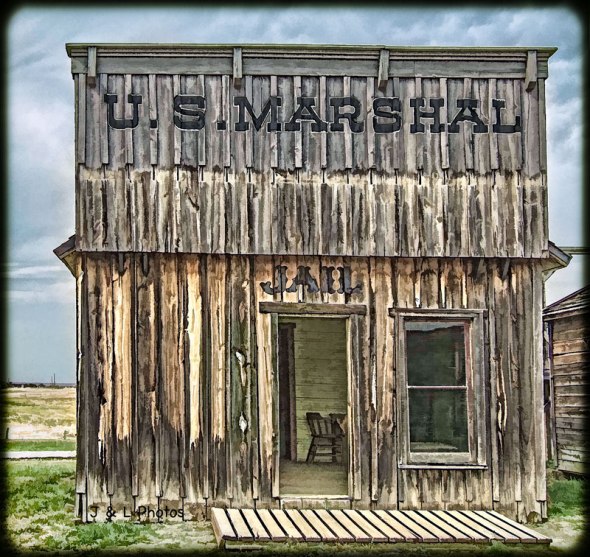 A U.S. Marshal was responsible for apprehending lawbreakers and bringing them to justice.  The culprits were probably tried in the Longhorn Saloon. 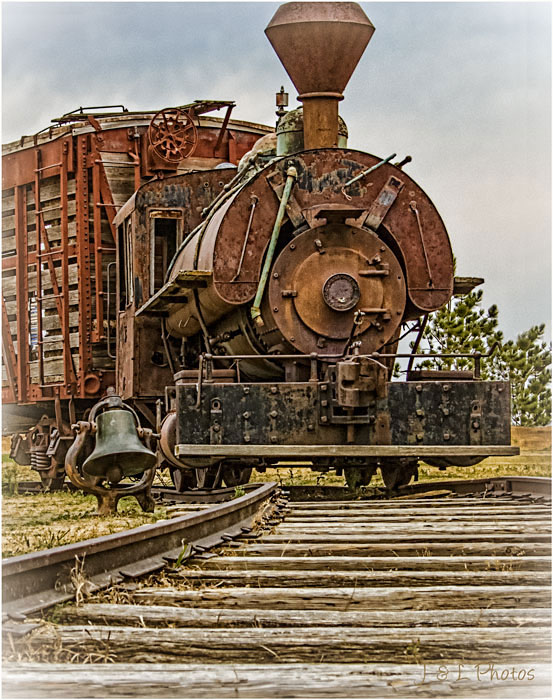 Among the objects found in the 1880’s Town was this locomotive which really posed no threat to the photographer because it was not fired up and running (Refer back to How We See Ourselves).

Before the Milk Carton 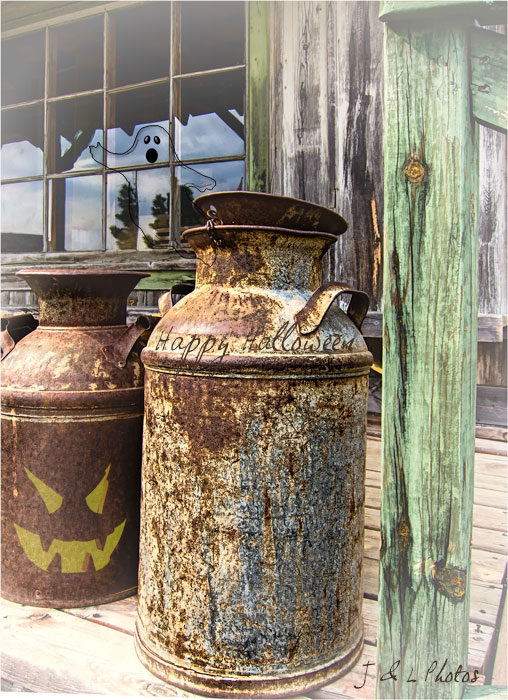 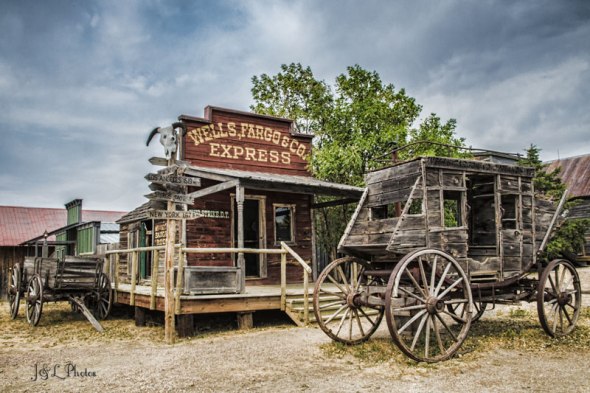 Wells Fargo was a major provider of transportation.  The depot, wagon and stagecoach survive . . . sans horses.

An urban 1880s setting constructed from actual old buildings by a movie company in 1972 in a small South Dakota town near I-90 was abandoned without ever being used for a film.  With the onset of winter as the setting was completed, the movie company gave the setting to Clarence Hullinger from whom they had borrowed antiques to fill the main street and some of the buildings. The town has since been further developed with additional original buildings and antiques and has become an attraction off I-90 Exit 170. 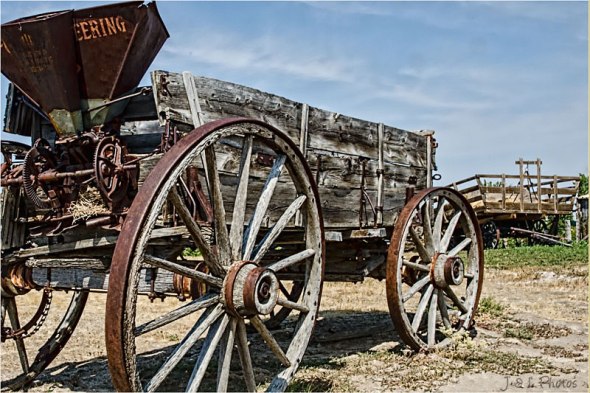 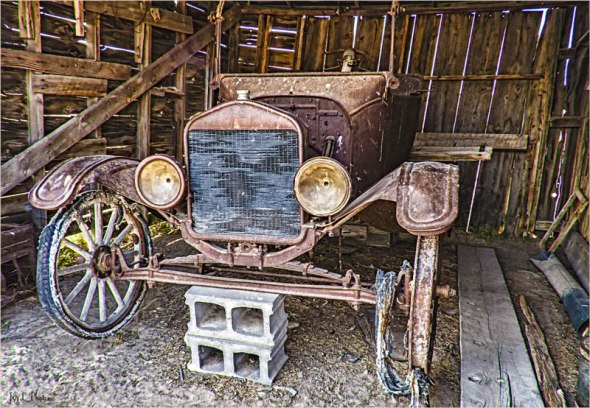 This dilapidated car setting up on blocks was strikingly imperfect. 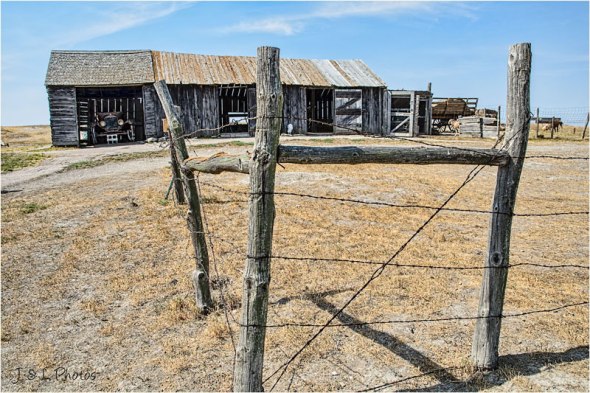 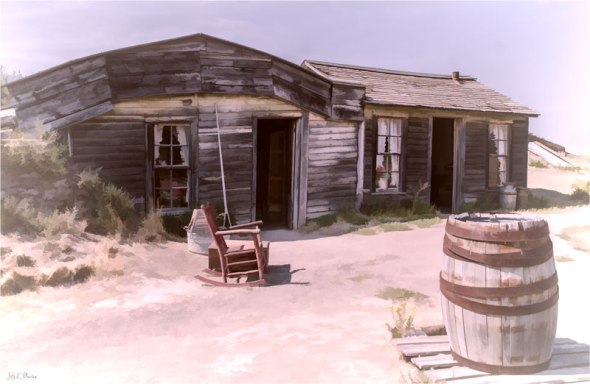 The Prairie Homestead located just north of the Badlands provided a wholesome lifestyle for Mr. and Mrs. Ed Brown. They built the home in 1909, and it is one of the last remaining sod homes still intact today. 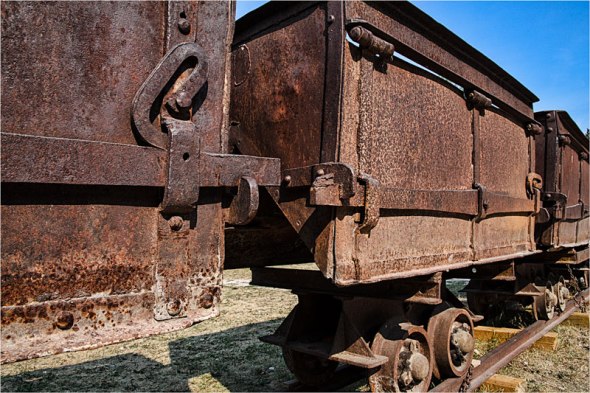 The neglected rail carts were used to transport debris from the gold mine. 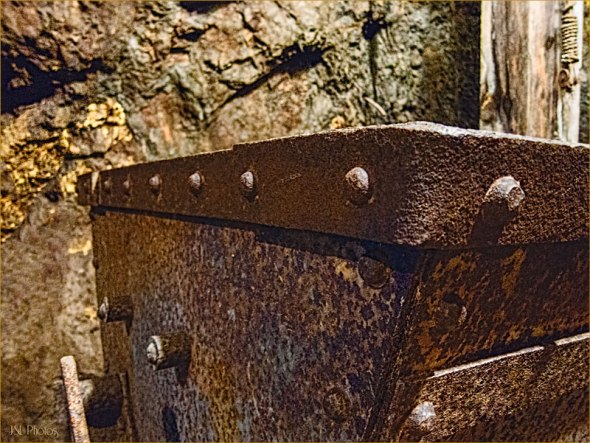 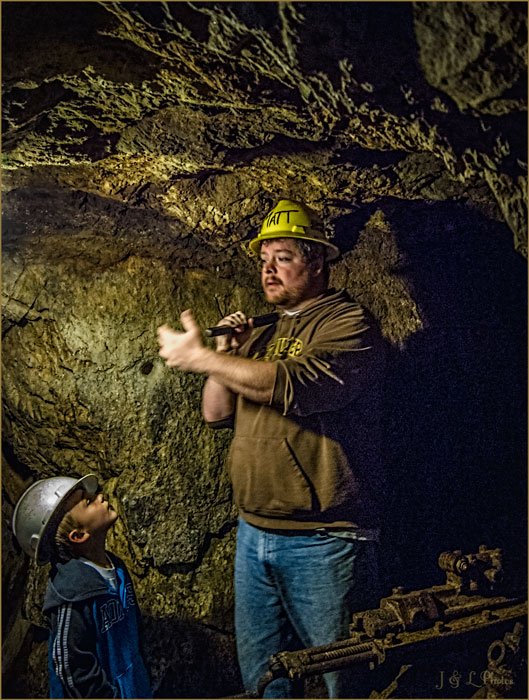 During a tour of the Big Thunder Gold Mine, Matt, our guide, explained double jacking:  Hand equipment was used to drill holes into solid rock.  Blasting powder was placed into  the drill holes. One miner would hold the steel drill bit, and the other would hit it with a sledge hammer.  Personally, we would much prefer the panning method. 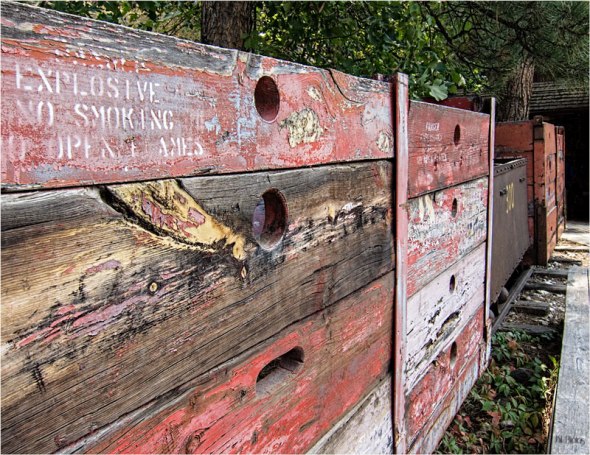 Explosives used for industrial hard rock mining were carted into the Big Thunder Gold Mine in Keystone, South Dakota.